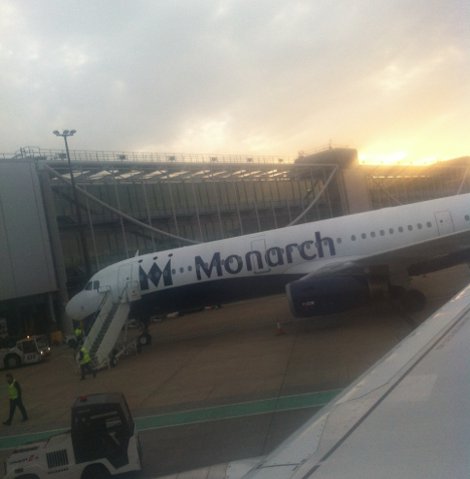 There are a myriad of airlines to whisk you off around Europe and beyond - EasyJet and Air Lingus are, perhaps, the most well-known of the cheap and cheerful flight operators. However, the airline I'd like to introduce to you today is "Monarch Airlines".

Monarch may not the first name which springs into your head when looking for a flight, none the less, Monarch Airlines shouldn't be ruled out. Serving a good selection of destinations around Europe - and a few beyond - Monarch Airlines operate out of all the popular airports: Gatwick, Luton, Manchester, Leeds Bradford, East Midlands and Birmingham.

Find out more about Monarch Airlines 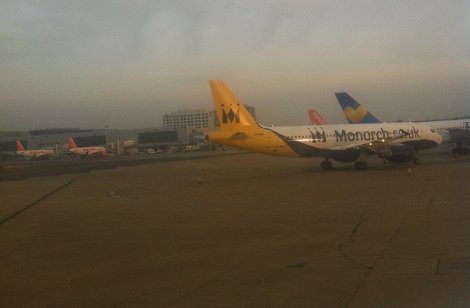 This Monarch Airlines flight leaves Gatwick
I can vouch for Monarch Airlines, as we have recently taken the family for a well-earned holiday in Lanzarote, and decided to fly with Monarch from London Gatwick.

The flights were easily booked online. And the seats can be reserved too - handy when taking a holiday with the family, so everyone can sit together.

Checking-in can also be performed on-line - which means less hassle at the airport. There were no queues at the "bag drop-off", and as we'd checked in online, the whole procedure took less than 5 minutes.

When flying from Gatwick, Monarch operate from the south terminal. Should you have a flight at silly-o'clock in the morning, and need to stay in a hotel the night before your flight, you can easily stay at a north terminal hotel because a mono-rail runs between the north & south terminal 24 hours a day. This shuttle only takes 2 minutes, so there isn't any inconvenience: for those really early morning flights where a hotel is needed, may I recommend the Premier Inn Gatwick Airport. This hotel is only a one minute walk from the airport - so no transfer buses to worry about.

Where do Monarch fly to?

Now, how about some interesting Monarch Airline facts? Here are just a couple of the extraordinary facts gleaned from the Monarch Airlines in-flight magazine.
With stats like that, how can you not want to fly with Monarch?

Give Monarch Airlines a try

If you think that Monarch Airlines could provide the flight for you, find out more information from Monarch Airlines. Why not pop over and see whether this airline has seats available for your holiday dates.

Visit the White Cliffs of Dover

The Venetian Waterways at Great Yarmouth

Hot tub hire for your cottage

Take a gondola up the Nevis Range in Scotland

The Falkirk Wheel links the Union Canal with the Forth and Clyde Canal, and makes a great family day out

Villa holidays sale on holidays to Greece, Cyprus or Turkey from James Villas

Cottages 4 You is now Cottages.com

The holiday cottage company Cottages 4 You is now Cottages.com

Explore King's Cross and Camden Lock when in London

Villa holidays on Crete- including villa with flights, villa with no car required

Villa holidays on Crete: including flights and villas where no car required

Other articles...
We may earn a commission when you use one of our links to purchase a holiday
UK-Holiday-Shop.co.uk is a trading name of Internet Affiliation Ltd - Registered in England and Wales - Company Registration number 7353326. VAT Registration Number GB981213527